What is a Disqualifying Disposition of Incentive Stock Options? 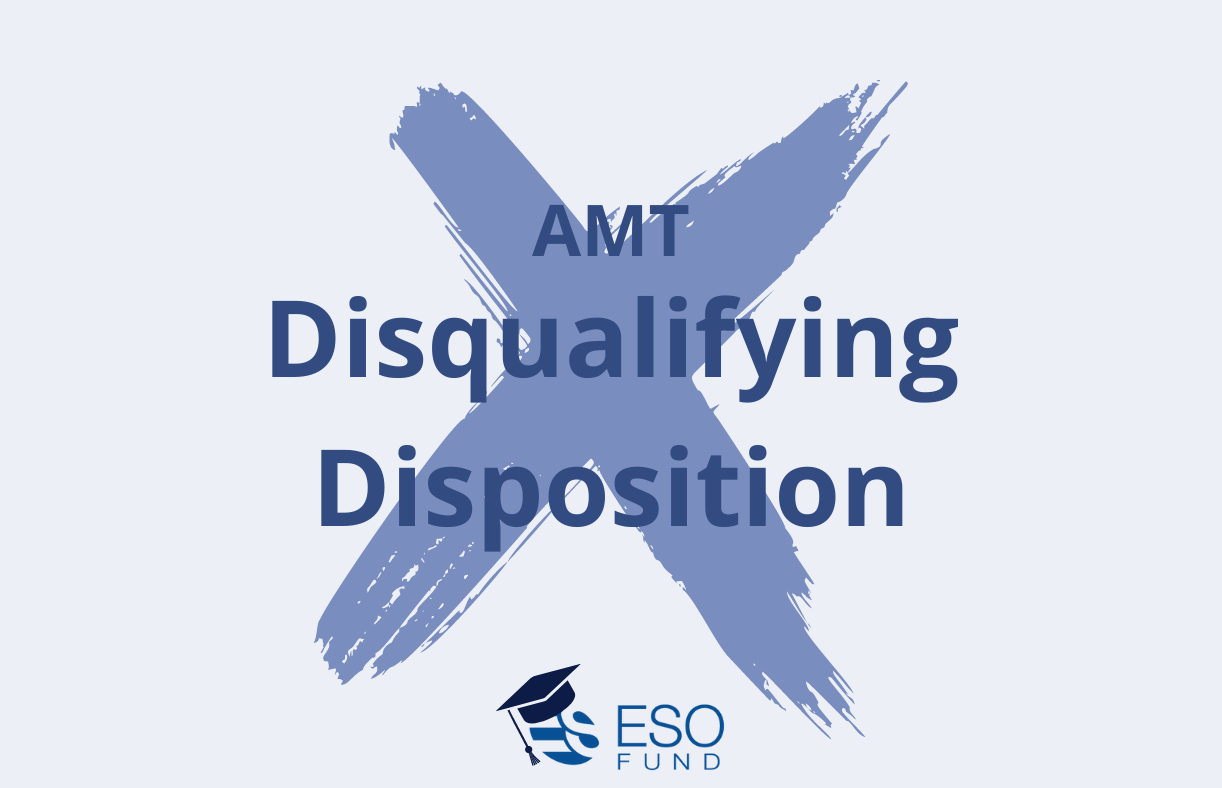 A Disqualifying Disposition refers to the sale of ISOs shares within the same tax year as exercise, allowing you to pay ordinary income tax instead of AMT.

The Alternative Minimum Tax (AMT) can apply to current and former employees of privately held companies when they exercise their incentive stock options (ISOs) if the fair market value is higher than the exercise price. Many employees exercise before liquidity to start the 1-year clock for long term capital gains but are unaware that AMT can be very expensive. This is especially true if your company is a unicorn or is likely to go public in the near future, in which case the 409a Fair Market Value of your stock may have risen considerably since your options were granted. If you exercised your stock options earlier this year, you have until December 31st to defer your taxes through an AMT disqualifying disposition.

Unlike ISOs, holders of non-qualified stock options (NSOs) are subject to tax at the time of exercise if the fair market value of the stock is higher than the exercise price ("spread"). In contrast, ISO exercises are only subject to AMT which isn't computed until you file your taxes the following April. However, be aware that if you leave a company and negotiate an extension on your exercise period that is longer than 90 days, your ISOs will become non-qualified stock options and loose their favorable tax characteristics. NSOs are more typically associated with non-employees such as contractors and outside business partners. Moreover, employers are required to withhold at least 25% of the spread at the time of the NSO exercise. This withholding includes federal, medicare, FICA, and applicable state income taxes. Independent contractors can avoid the mandatory withholding taxes by receiving a 1099 and handling their estimated taxes on their own. However, contractors who were once employees are still subject to mandatory withholding taxes by the company. If the company withholds at a lower rate than your tax bracket you will have to make up the difference when filing your yearly taxes.

Simply stated, if you sell shares resulting from the exercise of ISOs within the same tax year as the exercise, you are no longer required to pay AMT on your phantom gains but pay ordinary income tax on your actual gains instead.

Employees in states such as California or New York are especially vulnerable because of high taxes and the high cost of real estate. When state income taxes, property taxes, and mortgage interest deductions are high relative to your total income, then it becomes very easy to trigger AMT even if you aren't classically wealthy. Another common trigger for AMT is having a large percentage of your income arising from long term capital gains which is lower than the regular income tax rate. Moreover, when you pay AMT, your cost basis on the stock for calculating long term capital gains is still just the exercise price which means AMT is like a form of double taxation because you pay again at final liquidity based on the exercise price. The lack of a simple method for recovering AMT for those who only pay it during years involving a large ISO exercise means that you could end up paying taxes twice for the same block of stock and slowly recovering it over many years via the limited credit system. If you are subject to AMT all the time, this won't be a problem but you won't get long term capital gains treatment either. The AMT disqualifying disposition as discussed in Section 422(c)(2) of the Internal Revenue Code is one of the better ways to seek relief from AMT. Simply stated, if you sell shares resulting from the exercise of ISOs within the same tax year as the exercise, you are no longer required to pay AMT on your phantom gains but pay ordinary income tax on your actual gains instead.

How ESO Can Help Reduce the Risk

Since the cost of exercising stock options could already be very high, the addition of double taxation makes the entire investment more burdensome as well as risky. A solution for reducing this is risk is obtaining an advance from the ESO Fund to cover the entire cost of exercising your stock options, including the tax. An indirect benefit of letting ESO finance your option exercise is getting a disqualifying disposition that can eliminate much , if not all, of the AMT and reduce your overall tax liability. Conceptually, ESO is making installment payments on your shares. The first installment being your cost of exercise, the second installment is the money you need for taxes, optional 3rd installment is any secondary liquidity that may occur, and the final installment occurring at terminal liquidity (IPO or M&A). Since your final installment value depends on the value of the stock at that time, you are in effect retaining unlimited upside potential while also deferring taxes on the phantom spread (AMT) until those gains are actually realized. The value of deferring is two fold; first, you actually have money for taxes when the realization occurs instead of pre-paying taxes on a phantom spread. Second, the time value of keeping tax dollars in your pocket can be quite exceptional since the average time to liquidity for startup companies has been increasing in recent years. If you exercised your ISO stock options earlier this year and are concerned with the tax burden next year, then ESO is an ideal solution since the AMT problem is solved AND your cost of the original exercise is also refunded to you. The main catch is that your ESO transaction must occur during the same tax year as your option exercise in order to qualify for an AMT disqualifying disposition, so don't let December 31st creep up on you!

No repayments are due under ESO's program unless and until there is a liquidity event involving the company that issued the shares, such as a sale or IPO. Even then, you are not at risk because repayment is never higher than whatever the stock is worth at that time. See this page for more information on how to estimate the cost of paying AMT. For more information regarding ways to reduce stock option taxes or how ESO can benefit you, please contact us at the ESO Fund.